The heads of state of China, Japan, and South Korea are scheduled to meet Sunday for the first trilateral talks in three years. They are expected to focus on trade, their relationships with North Korea, and war history that has long divided Japan from the other two nations.

Chinese Premier Li Keqiang and Japanese PM Shinzo Abe will be meeting South Korean President Park Geun-Hye in Seoul on Sunday for wide-ranging talks intended to reestablish a three-way relationship that has soured since Abe took power, largely due to disagreements over the interpretation of World War II history.

Park is also expected to hold one-on-one talks with Abe following the larger meeting, the first time the two have had such a talk, as Park has refused to meet with Abe, demanding the Japanese head of state issue a more forthright apology over the forced prostitution of Korean “comfort women” by Japanese soldiers during WWII. Experts tell the Japan Times that Park’s previous refusal to meet with Abe may turn the upcoming talk into a “sort of diplomatic victory for Abe,” though such attitudes towards their meeting may be curbed by Park’s refusal to host a state banquet or luncheon for Abe, as is typical for friendly heads of state to do for visiting counterparts.

Park’s tense relationship with Abe echoes that of China. President Xi Jinping stated in 2013 that Abe was “not welcome” in China following his visit to the Yasukuni Shrine, a war memorial established in the mid-1800s that has since come to honor WWII fighters China and South Korea consider war criminals. 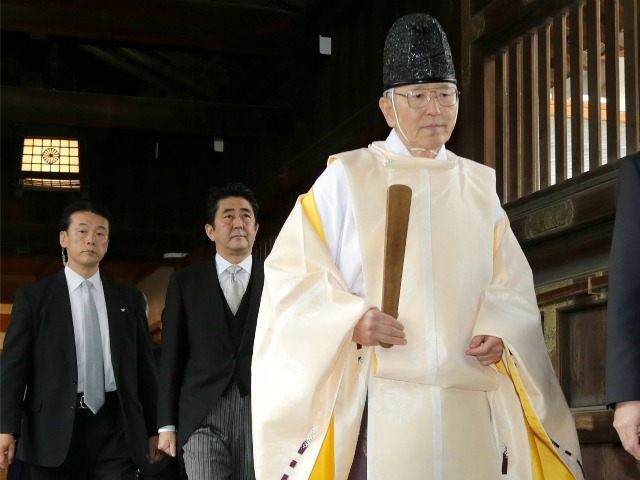 In addition to distancing South Korea from Japan, Park has been seen as improving relations between South Korea and China. Their closeness has alarmed some in the United States. Officials warned in 2014 that China had brought South Korea closer to it by highlighting their shared disputes with Japan and, should America fail to act, “South Korea will be ripped away [from the U.S. and Japan] and placed in China’s sphere of influence.”

The trilateral meeting will seek to lessen these tensions as the nations face multiple regional issues in which their interests are aligned. Arguably most prominent among these is North Korea’s drive to acquire and potentially use nuclear weapons. North Korea threatened military action against South Korea in August, following an attack on the Demilitarized Zone (DMZ) between the two countries against South Korea’s anti-communist broadcasts into the North. Due to South Korea’s response to the North’s aggression, dictator Kim Jong-Un warned that he had placed his troops in a “fully armed state of war” and was ready to attack. Ultimately, North Korea backed down and the leadership of both nations agreed to a return to the relatively stable status quo.

While the Japan Times and Yonhap have covered the meeting, the talks have largely escaped commentary in the front pages of Chinese state media outlets Xinhua and People’s Daily, replaced instead by belligerent editorials on the appearance of the U.S. Navy ship in the international waters of the South China Sea earlier this week.