Legislation introduced by Sens. Tom Cotton (R-AR) and Mitt Romney (R-UT) is looking to become the Republican Party policy standard on labor issues with its push to increase wages while protecting the United States labor market.

Cotton and Romney’s “Higher Wages for American Workers Act” couples a gradual increase to the federal minimum wage with mandatory E-Verify for all U.S. businesses to prevent employers from illegal hiring that undermines Americans’ job prospects.

Cotton said in a statement:

American workers today compete against millions of illegal immigrants for too few jobs with wages that are too low — that’s unfair. Ending the black market for illegal labor will open up jobs for Americans. Raising the minimum wage will allow Americans filling those jobs to better support their families. Our bill does both.

Small businesses with fewer than 20 employees would get to phase-in to the gradual minimum wage increase over a two-year period. Overall, an estimated 3.5 million Americans would immediately see their wages boosted as a result of the policy.

Screenshot via Sens. Cotton and Romney.

The minimum wage has not been raised in any way since 2009, when the cost of living was 20 percent lower despite support for increases. In Florida, which voted twice for former President Trump, more than 60 percent of voters supported increasing the state’s minimum wage to $15 an hour by September 2026.

The mandatory E-Verify portions of the plan include a litany of provisions that seek to prevent business owners from hiring illegal aliens over Americans. Most significantly, the plan ensures that there are no industry carve-outs and thus all employers must comply with E-Verify.

Small businesses and the agricultural industry would get to phase-in to mandatory E-Verify over 18 months. In addition, employers would see higher civil and criminal penalties for hiring illegal aliens or forging employment verification paperwork.

The plan also requires eligible workers to provide photo IDs to their employers, authorizes states to share their driver’s license data to improve the accuracy of E-Verify, renews the program annually with automatic $100 million funding, and allows the federal government to more easily track unusual use of Social Security Numbers.

“We must create opportunities for American workers and protect their jobs, while also eliminating one of the key drivers of illegal immigration,” Romney said.

Labor market protections are some of the most popular policy initiatives among likely U.S. voters. The latest Rasmussen Reports survey finds that nearly 7-in-10 Americans support mandatory E-Verify and almost 65 percent said businesses should recruit Americans for jobs rather than importing foreign workers. Another 73 percent said the U.S. should reduce overall immigration levels.

Cotton and Romney are hoping the legislation, which has been endorsed by Sen. Tim Scott (R-SC), will garner more support in the Senate and eventually become the standard labor policy for the Republican Party.

The plan is a larger realignment within the GOP to shift away from the donor class-centric, economic libertarian agenda — largely unsupported by most in the American electorate — toward populist solutions for issues like income inequality, labor protections, and crime.

For weeks, Senate and House Republicans have made a point to note that immigration levels are a labor issue — one that either benefits companies or workers depending on if the labor market is flooded or tight. Sens. Josh Hawley (R-MO), Marco Rubio (R-FL), Bill Haggerty (R-TN), Rep. Mo Brooks (R-AL), and Florida Gov. Ron DeSantis (R) have noted that immigration’s impact on wages and jobs for Americans. 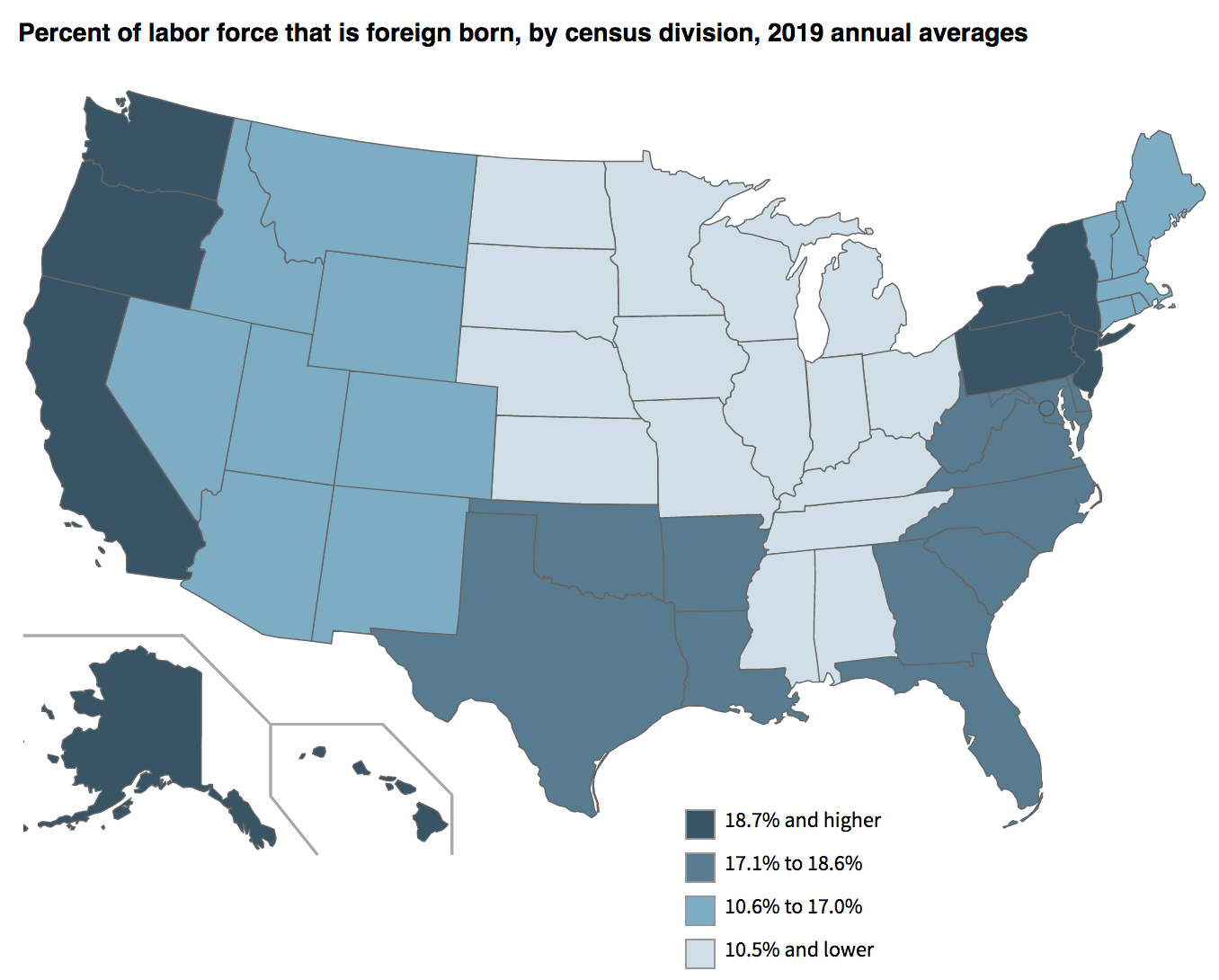 Screenshot via the Bureau of Labor Statistics.

Increasing legal immigration levels and delivering an amnesty for illegal aliens to permanently stay in the U.S. has been a longtime priority of the big business lobby, Wall Street, Big Tech, and other corporate interests. A flooded labor market helps reduce U.S. wages, allowing businesses to cut labor costs, increase profit margins, and tip the scales of the economy to their demands.

Research by the Center for Immigration Studies’ Steven Camarota reveals that for every one percent increase in the immigrant portion of an American workers’ occupation, Americans’ weekly wages are cut by perhaps 0.5 percent. This means the average native-born American worker today has his weekly wages reduced by potentially 8.75 percent as more than 17 percent of the workforce is foreign-born.

Current immigration levels put downward pressure on U.S. wages while redistributing about $500 billion in wealth away from America’s working and middle class and towards employers and new arrivals, research by the National Academies of Sciences, Engineering and Medicine has found.

John Binder is a reporter for Breitbart News. Email him at [email protected] Follow him on Twitter here.