Rep. Ken Buck (R-CO) railed against “socialists in Hollywood” on Wednesday during the House floor debate over impeachment of President Donald Trump. The congressman said that it was Democrats who didn’t condemn the violence promoted for years by left-wing celebrities like Robert De Niro, Madonna, and Kathy Griffin made against President Trump.

“The socialists in Hollywood joined their [Democrat] allies in Congress,” said Buck. “Robert De Niro said that he wanted to punch the president in the face. Madonna thought about blowing up the White House. Kathy Griffin held up a likeness of the president’s beheaded head.”

“And nothing was said by my colleagues at that point in time. In fact, one Democrat colleague said that Trump supporters should be harassed wherever they are, in restaurants, on the street, in supermarkets,” added Buck, referring to Rep. Maxine Waters (D-CA)’s comments from 2018.

The image, from photographer Tyler Shields, ignited a firestorm of controversy when it was first published online by TMZ in May. (Tyler Shields/TMZ) 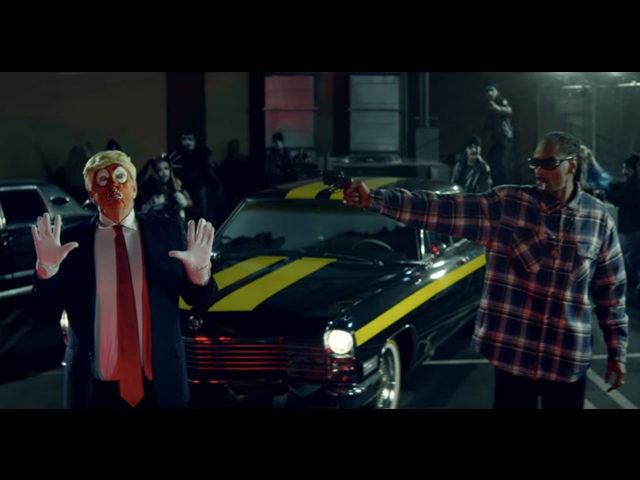 Some other celebrities who attacked Trump and his supporters included rapper Snoop Dogg, who pointed a gun at the president (dressed to look like a circus clown) and pulled the trigger in a music video, and actor Mickey Rourke, who threatened to beat President Trump with a baseball bat, proclaiming, “He can suck my fucking dick.”

“The president’s supporters were harassed,” the congressman continued. “Ajit Pai, the head of the FCC, was called a ‘dirty, sneaky, Indian,’ his children were harassed in school, the press secretary Sarah Sanders was kicked out of a restaurant for being a Trump employee. The DHS secretary Kirstjen Nielsen [was] harassed at her home.”

Buck went on to say that while all of this was going on, “the president was under investigation by a special counsel who found no collusion, no conspiracy with Russia.”

“Madam Speaker, I’ve heard that President Trump radicalized the rioters who stormed this Capitol, and I would say we need to look no further than ourselves to find out what happened, and to look at history,” said Buck. “Americans were frustrated when they learned that the FBI was investigating the Trump campaign.”